To See or Not To See? That is the Question. 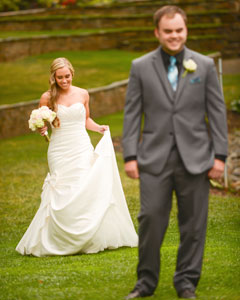 Nearly every bride and groom faces the decision of when to do the “formal” wedding pictures. Before the ceremony or when she is walking down the aisle?  While both approaches have pros and cons, most brides vote for practicality.

It used to be that most weddings had the formal pictures taken after the ceremony or in a fashion called “split formals.” This method allowed the professional photographer to take as many pictures as possible without the bride and groom seeing each other before the ceremony; and completing the rest of the pictures after the ceremony. While split-formals slightly reduced the time guests had to wait for the wedding couple at the reception, it hardly eliminated it.

Today, very few bridal couples participate in “split formals”. Now, more than 90 percent of the couples I work with have their formal pictures completed before the ceremony. Couples are now choosing to be able to be at their entire reception instead of missing 2 hoursof it taking pictures. After all, this is usually the biggest party of their lives!

But what about savoring the anticipation that is part of not seeing each other before the wedding? Consider an idea that I call “THE FIRST LOOK.” Set the stage in the sanctuary, or any place of your choosing, for the bride to meet the groom prior to the ceremony and the photo session.

Everything is just right: the flowers are at their peak; hair and makeup is perfect; and the air tingles with anticipation.

The bride-to-be enters the empty sanctuary, save for the groom, whose back is to her. The bride tiptoes down the aisle to her waiting groom who can only hear the rustle of the dress. With each step, her heart beats faster (and so does his). Finally, she wraps her arms around him from behind…he turns…seeing his beautiful bride for the first time. The moment is special…a moment not ever forgotten.

Pictures after the wedding…(the cons)

Things are different: people hug and flowers break; if there are tears, makeup is smeared; hair has a way of rearranging itself; and lipstick has a certain way of migrating to faces, shirts, and dresses. In short, everything has a more un-kept look. Fine for those candid shots everybody loves to look at, but not for the mantelpiece of a customer’s living room.

After the ceremony, the couple comes down the aisle for hugs and kisses from friends and relatives. This intense, joyous moment should not be interrupted to take more wedding pictures.

There is too much going on after the ceremony. Mothers and sisters head for the rest rooms to reapply makeup and adjust dresses. Family and wedding party members are scattered, mingling, getting a drink. . Group pictures take longer because gathering everyone back up is difficult. Guests become anxious because the bride and groom, family, and wedding party aren’t at the reception…because they have to take pictures.

Split formals take more time, because you have to call up the same group twice – once before the ceremony and once after the ceremony. Time is wasted because of this.

Do your pictures before the ceremony…
There is less stress on everybody. The bride knows two hours ahead of time that everyone is here, and all is done. No matter what may go wrong, she has bought two hours of insurance. The bride is relaxed and sets the stage, creating the mood for the entire wedding. And why not? It’s a private, “invitation only” warm-up to the big event, and all the important people are there.

Doesn’t seeing each other before the ceremony ruin the excitement?

Won’t the notion of seeing each other before the ceremony kill the thrill, relegating it to an anti-climatic afterthought? Hardly. Nothing can steal the thunder of that moment, as the music sounds its call, when the beautiful bride dramatically appears at the chapel doorway. All rise in her honor as she elegantly glides down the aisle to join her handsome groom. Amidst a gushing of nearly overwhelming emotions, the beautiful vision many brides dream about is left intact.

In contrast, many brides who wait until the ceremony to see their groom for the first time are on sensory overload. Stage fright is rampant in the reign of formality, and when she arrives at the altar, he can’t kiss her, tell her how beautiful she is, or give her a reassuring hug.

Since 1999, when I first began shooting weddings I have done formal wedding pictures before the ceremony and I have never had anyone regret it. How many wedding tips are that solid? Scheduling the photographs before the wedding isn’t just a good suggestion, it’s a valuable investment tip to maximize time and optimize your clients’ experience on “their day.” It makes a difference not only in the photographs, but in the whole wedding experience. It’s been said that hindsight is 20/20; here’s a chance to include a bit of high-quality hindsight into your foresight.